Discussion of the Gold portion of the Permanent Portfolio

Im curious if bitcoin really is becoming a competitor to gold. Im a fan of both assets. 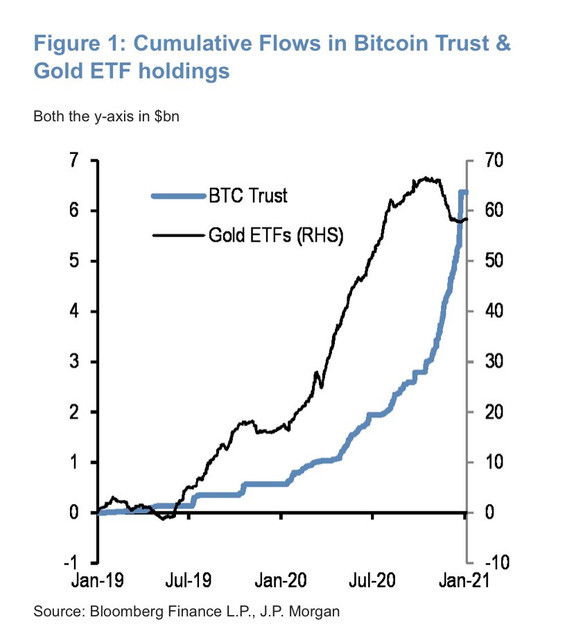 Does anyone else have other data sets on this?
Top

bitcoininthevp wrote: ↑
Tue Jan 05, 2021 2:28 pm
Im curious if bitcoin really is becoming a competitor to gold. Im a fan of both assets.

Does anyone else have other data sets on this?

Most likely it is a temporary thing while BTC is bullish.
Top

But regardless, do you think people are actually taking billions out of gold and putting it into bitcoin?
Top

But regardless, do you think people are actually taking billions out of gold and putting it into bitcoin?

I think there probably is some gold flowing to bitcoin. A lot of traditional investors view Gold/Bitcoin as insurance, not strictly as an inflation hedge.

In my view bitcoin is a currency like cash, although without the backing of a government. Of 25% cash, I put 2.5% into crypto.
Top

But regardless, do you think people are actually taking billions out of gold and putting it into bitcoin?

Days like today sure make it look like this is what's happening. At the moment (noon EST) Gold is off by 3% and Bitcoin is up by 7%.
Top

What happens when bitcoin is regulated and destroyed?
Top

Don, seems rather aggressive and off topic for the thread but Ill take a crack at a response which includes gold.

What happens when gold is regulated and destroyed?

Is it harder to regulate & destroy gold or bitcoin?

Who is the one regulating bitcoin in this scenario and how? Will other jurisdictions follow along or be emboldened to take an opposite stance?

Does regulating bitcoin destroy it?

Usually when people say something like this they mean, will bitcoins price go down if the US makes it illegal to buy/sell/hold bitcoins? Some responses in this thread for you to review: viewtopic.php?f=9&t=11661&p=218930#p218930

It is actually harder in many respects to stop or regulate bitcoin when compared to gold. Jack booted thugs cannot come to your house looking for bitcoin and find any physical thing like they can with gold. Governments dont hold much if any bitcoins like their huge gold positions which can make price manipulation easier. Physical gold is transacted physically which violence and governments are better at stopping than some numbers floating by on the Internet. Gold, due to its achilles heel of being in the physical world, has caused it to largely centralize in a few spots making control easy.

But cashing out would be difficult.
Top

But cashing out would be difficult.

It would be harder but still easier than cashing out of a banned gold.

Bitcoin: "What is this bank transfer I see to your account?" "Oh, consulting"
Gold: "The postal gestapo has detected gold in an outgoing mail item. Please report to jail."
Top