Xan wrote: ↑
Mon Apr 30, 2018 8:57 pm
Gary has some "interesting" libertarian positions. Like that the baker should be forced to bake the homosexual cake. Audible gasps from the audience during the LP debate when he dropped that bombshell. Don't know how he still got the nomination. Says something about how crazy the other candidates were, I suppose. John McAfee was one.

I have a question in regards to your second sentence.

I assume that the law says that this is what should happen so that there is not bias against someone due to the person's sexual orientation?

I'm sure if the "progressives" attain more power they will pass laws making it illegal to refuse to do anything on the basis of moral objections... but only if the moral objector is a conservative. Refusing to bake a cake for a traditional wedding, for example, will not be punished.
Top

stuper1 wrote: ↑
Wed May 02, 2018 8:20 pm
And yet the talk of impeachment continues unabated. The nation's so-called elite just can't get over the fact that somebody like Trump won the election. Frankly, I can't believe it either. It seems utterly surreal. And I'm one to believe he's not a monster, just another run-of-the-mill egomaniac, as I'm convinced anyone who would want to be president must be.

I was looking at an acquaintance's Facebook feed the other day. He's a very successful local businessman and apparently not a Trump hater. He has a big family and is not at all deranged. Back around the election time in 2016, he posted something which I found very interesting and read along these lines:

"To all the people out there who supported Obama and hate Trump, I have one question: what it is in Obama's life experience compared to Trump's life experience that makes you think that Obama was so much better qualified to be president than Trump?"

Just the minor facts that:

1) Had a much better education
2) Had a law degree
3) Had taught constitutional law
4) Held political office in Illinois
5) Had been a U.S. Senator
6) Reads books
7) Does his homework


What were Trump's qualifications other than he is truly gifted in stirring up people's passions to absolutely love him?

Trump is and was a successful businessman.

Obama had no legislative accomplishments, or any other accomplishments for that matter. His primary qualification for the Democrat nomination was his race.
Top

Cortopassi wrote: ↑
Thu Aug 23, 2018 9:53 am
I have gone from wanting him to drain the swamp, to voting for him, to cringing at tweets, to yelling at the TV, and finally just wanting him to go back home and let somebody else do this job. This is a non-stop reality show nightmare. 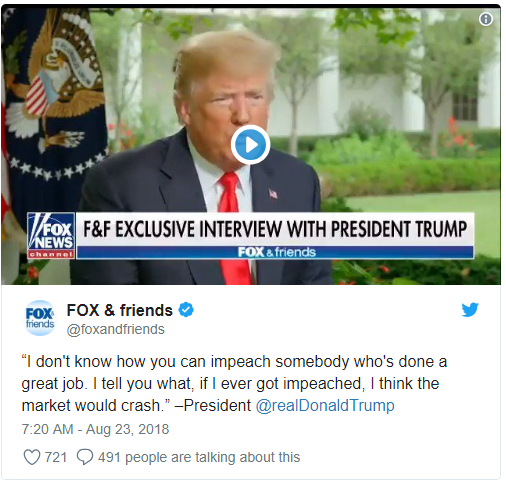 He DID get impeached.....And, so far the Market has NOT crashed!

That's because no one takes the impeachment seriously.
If he were actually in any danger of removal, the market would indeed crash.
Top

I'm curious to know what evidence you have for this statement? I can find plenty of places on the internet where people claim that McCain was a show-off pilot who never would have crashed in Vietnam if he hadn't been flying inappropriately. And that he then behaved dishonorably and disloyally in prison. That he left his first wife when he found another woman with a lot more money. That he had dishonest dealings related to the savings and loan scandal. That he was only too happy to send America to war whenever possible, thereby enriching the military-industrial complex, but causing many of our young people to come home with limbs missing or worse, not to mention far worse casualty levels among the native inhabitants. And the list goes on.

I join you in NOT being a McCain fan. Again from watching so much C-Span I saw a lot of him, including the time he'd spend mingling with voters after campaign events and hearing what he said to them. I always thought him to be Mr. Ingenuine with no principles.

Oh, he had character all right.
The character of a criminal.
Top

stuper1 wrote: ↑
Fri Sep 07, 2018 10:30 am
I support some of the same policies as Trump, such as the absolutely incredible idea that the American president should actually put the interests of the American people first, as opposed to people from other countries.

As a bonus, I said to anybody who would listen long before the election that I hoped Trump would win because it would be much more entertaining if he did.

CANNOT deny the entertainment factor! I've many times stated that if 10 years ago someone had written a fiction book which had all the exact details of the Trump campaign / presidency to date that no one would have published it because it would have been 100% rejected on the basis of it just being TOO unbelievable!

That is absolutely correct.
Top

Cortopassi wrote: ↑
Fri Dec 21, 2018 7:39 pm
Then what are the tweets meant to do, seriously, other than piss off approximately 50% of the nation and endear him to his base? There is no attempt to unify. There seems to be little attempt to reach bipartisan agreements. Not all Trump, for sure, but he exacerbates it.

Just imagine if he spent a few days tweeting crap about medical monopolies and it's time to break them up and reduce costs.

I'll hand it to him currently, getting out of Syria seems to have pissed a lot of people off, but I agree with that.

He has such a grasp of tweeting to incite and cause people to love him or have their heads explode that I wish it was put to better use.

If the environment is not as the media portrays, why do you have Cohen's comments, Tillerson's comments, Mattis with his letter, his berating of Sessions and such happening?

If he stopped the tweeting, 75% of the negative news bias goes away. Nearly every story in recent memory, negative on Trump, always starts with a "And this is what President Trump tweeted early this morning...."

Yes, the tweets intentionally make the lamestream media's heads explode on a regular basis.
And they get the base fired up.

As for the rest of your questions:

Cohen is a crappy lawyer who has been involved in some shady business that probably shouldn't be illegal but is, thanks to the web of regulations around everyone, especially in NY. He is trying to throw Trump under the bus to avoid going to prison for the rest of his life.

Tillerson's reported comments may or may not be accurately reported.

Mattis is a war hawk and doesn't want the US to pull out of our overseas morasses.

Sessions was a seditious pile of crap who did his best to sabotage Trump in every way.

As for me, I can't think of a President in my lifetime who has been better than Trump overall.

Regarding your comments of Cohen / Tillerson / Mattis / Sessions? What do they all have in common? One person put them in their positions. Therefore what does that say about that person's judgement?

I assume you have hired / fired people? I have done both? And, I think my batting average is much higher than Trump's in this area.

I have indeed hired a few people, with a good track record.

So I can't be too critical of Trump in that regard.
Top

Mountaineer wrote: ↑
Fri Jan 25, 2019 5:43 am
Getting back to the thread title, I came across this little diddy and thought some of you might find it enjoyable, funny, disgusting, or a bunch of crap. Pick your own descriptor.

We're sick of politicians, sick of the Democratic Party, Republican Party, and sick of illegals. We just want this thing fixed. Trump may not be a saint, but he doesn't have lobbyist money holding him, he doesn't have political correctness restraining him, all you know is that he has been very successful, a good negotiator, he has built a lot of things, and he's also not a politician, he's not a cowardly politician. And he says he'll fix it, and we believe him because he is too much of an egotist to be proven wrong or looked at and called a liar. Also, we don't care if the guy has bad hair. We just want those raccoons gone, out of our house, NOW.

You are welcome to pass this on. I feel this is why thousands of people who haven't voted in 25 years are getting involved. The raccoons have got to go.


I find it that if anyone believes the above then that person votes for Trump. However, there is much to dispute in all that it alleges. And, again, reasonable people will differ on what is true in it and what is not. The Trump voter probably agrees with every word of it.

You may be surprised to hear that I don't agree with every word of that.
To be precise, I don't find him an ass or an egomaniac or particularly crude.
But that's because I'm from the Northeast and have spent a lot of time in New York City.
As someone said recently, "What many people call "crude and insulting attacks" is what New Yorkers call 'talking'".
Top

Not sure if this deserves a separate thread, but what do people think of the recent pardons/commutations?
Top

Cortopassi wrote: ↑
Tue Feb 18, 2020 1:14 pm
Not sure if this deserves a separate thread, but what do people think of the recent pardons/commutations?

I was just posting the same in a similar thread.
I think it's bullshite.
Even the Republicans warned him that this was the kind of corruption he was going to fight, once upon a time.
RIP Ron Cobb (Daily Check-in Thread).
Top

Any response to the natural ability statement? Do you think he may actually start losing his core as/if this gets out of hand?

Any response to the natural ability statement? Do you think he may actually start losing his core as/if this gets out of hand?

That article describes TDS type A and TDS type B, but I would argue there’s another option: ignore most of what a president says and judge them based on what actually does or does not get accomplished. If you generally approve, vote for them. If not, don’t. It really can be that simple.
Top

I read somewhere that Trump has a 56% approval rating on his handling of the coronavirus. I don’t understand the high figure, but there it is.
RIP Ron Cobb (Daily Check-in Thread).
Top
Post Reply
1083 posts