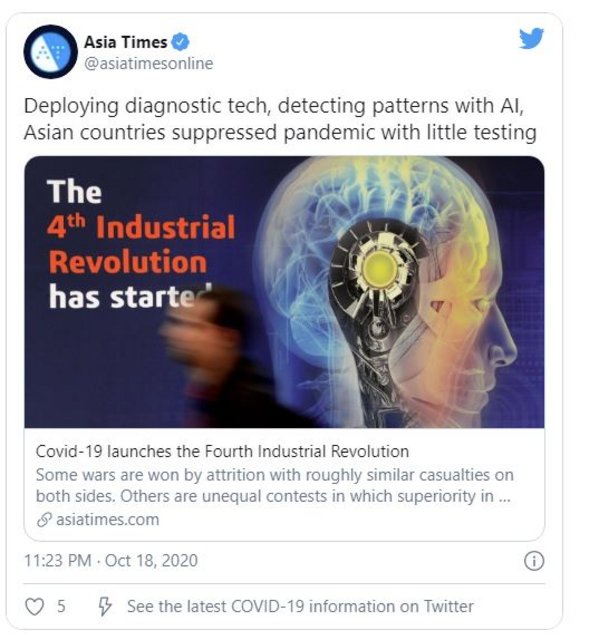 Welding people's apartment doors shut might have had something to do with it.
But I suspect the real "secret" is that they are lying their asses off.
Top

(well, nearly)
Think everyone will be leaving Victoria once the state borders open

<snip>
Melburnians still cannot visit regional Victoria until 8 November. And there’s nothing on in-home visits, which will supposedly be announced tomorrow.

Nevertheless, after 16 weeks of hard lockdown, Melburnians can finally breathe a collective sigh of relief. The nightmare is ending.
<snip>


"Order out of chaos." That's the slogan of the American Communist Party referring to the technique by which you bring about political and social transformation by creating a boogie man so frightening that the people beg for your intended "solution."

For an excellent review of how the coronavirus phenomenon has been the launching pad for effecting literally ALL of the global elite's technocratic goals, this very concise 18-minute documentary really hits the nail on the head. The role of artificial intelligence figures prominently, and it has nothing to do with China "suppressing" anything.

Looks like IL's Gov. Pritzker has shut down indoor service in bars and restaurants in Cook County in response to rising cases. That's a bummer.

CA's Gov. Newsom is like the hipster of the tyrannical governors. He was locking shit down like this before it was cool.
Top

Doesn't mean they won't break out the numbers separately, but probably it'll just be combined into one. Which will then be interpreted by the media as all COVID. Most interesting.

So here's a question. Respiratory virus infections are going up, er excuse me, "surging", like they do every year at this time. So is it going to be a worse than usual year, or a lighter than usual year?

Argument for worse than usual: COVID is now added to the mix. True, that simply means there are now N+1 viruses out there ready to infect you instead of N, but this one is particularly bad news for the sort of people who are in the most danger of dying during flu season.

Argument for lighter than usual: A lot of the aforementioned vulnerable people already said their farewells in the spring. So there is less "dry tinder" out there, which could make a significant impact on overall mortality figures. I suspect this is a major reason why the case fatality rate for COVID is dropping like a rock, from 3% initially to something like 0.2% now (per WHO).
Top

As we know I'm a numbers guy...I tried to understand COVID from a layman's perspective via reading but found it impossible. There's probably good info somewhere, but I'm guessing you need the background and knowledge to understand it objectively. That's not in my kitbag.

Here's what the numbers say.

Clearly the medical profession has improved their knowledge in how to treat COVID witnessed via the mortality rate. A definite positive note in this story.

Clearly COVID is a killer for those whose health is compromised in some way. (Lost a first cousin in this category last week...he was the oldest of my generation of cousins). Statistically, this isn't even debatable at this point.

If not in the above category, then COVID can run from a nothing burger to the worst flu you've ever had in your life. Seems to be individual physiology dependent and there is a clear trend to definitive long-term health repercussions. Not for everyone, but for some for sure. Again, statistically, not even debatable at this point.

The rural areas of America are getting hammered right now and since most of rural America has bought into the this is a nothing burger/masks are all about freedom and the American way of life, the virus is going to do what it does...cuz the virus isn't political and could care less what your political beliefs are. Whether rural America goes the way of NY will probably depend on if medical infrastructure gets overloaded, improved treatment not withstanding. I'm in a rural state and healthcare rationing just started as the infrastructure is getting saturated.

This stuff ain't hard to figure out with a little time (as in what COVID does).

Pretty sure I posted basically the same post with data known at the time a couple hundred posts ago.
Top

Tortoise wrote: ↑
Mon Oct 26, 2020 4:44 pm
Looks like IL's Gov. Pritzker has shut down indoor service in bars and restaurants in Cook County in response to rising cases. That's a bummer.

CA's Gov. Newsom is like the hipster of the tyrannical governors. He was locking shit down like this before it was cool.

Yep. Which one is cool and which one is the wannabe dork?
If people aren't already fleeing CA and IL fast enough due to high taxes and cost of living, tyranny will just help accelerate the process.
Top

Now it should be easy to compare one year to another without concern that viral respiratory illnesses of all kinds are not being indiscriminately relabeled as "CoVid." I'm anxious to see some objective comparisons of how the incidence of viral respiratory illness in general has changed (if at all) with the advent of CoVid. Previous attempts to compare "apples with apples" have suggested that this year has not been all that unusual.

What's different is that when boatloads of elderly and co-morbid people died last year from the flu, nobody gave a freaking damn.
Top

Cuomo was PAID to seed nursing homes with the virus

Being reported this morning: Cuomo received substantial funds from stakeholdlers within the medical industry to assure that CoVid carriers were brought into nursing homes. Take a look at who those stakeholders were and tell me this isn't a flat-out conspiracy to commit murder.

Maddy wrote: ↑
Tue Oct 27, 2020 7:26 am
Being reported this morning: Cuomo received substantial funds from stakeholdlers within the medical industry to assure that CoVid carriers were brought into nursing homes. Take a look at who those stakeholders were and tell me this isn't a flat-out conspiracy to commit murder.

This problem runs rampant throughout our political system on both sides of the aisle. We need a total overhaul and reevaluation of money as free speech.
Top
Post Reply
3781 posts