It's being reported this morning that Germany has once again gone full-blown Nazi, carrying out raids against citizens daring to contradict the official CoVid narrative.

Still think this is about a virus?
Top

This is a very interesting interview with Mike Yeadon, a former VP at Pfizer, regarding his thoughts about COVID-19 and the UK’s response to it. It has been removed by YouTube but it’s still available at Facebook... for now.

Maddy wrote: ↑
Fri Nov 20, 2020 7:13 am
It's being reported this morning that Germany has once again gone full-blown Nazi, carrying out raids against citizens daring to contradict the official CoVid narrative.

Still think this is about a virus?

Maddy wrote: ↑
Mon Nov 09, 2020 4:18 am
The media hasn't allowed even a small slice of the truth about this to be aired. I am, at the moment, beginning the workup of a wrongful death case involving one of the many victims of this political stunt who were locked down and therefore unable to obtain monitoring and treatment for cancer. It was my friend, and I watched the whole fricking thing unfold from beginning to end.

They've counted every last sniffle in this county, but no one has shown the slightest interest in including my friend's death in their statistics.

How awful. The people responsible for this outrage should roast in hell.
Top

A recent medical study found that of people who test positive for SARS-CoV-2 on an RT-PCR test with a cycle threshold of 35 (the standard threshold currently used in the U.S.), less than 3% of them are actually infectious:

The take-home message: For many months now, U.S. policy decisions on lockdowns, school closures, etc. have been based on an RT-PCR test setting that’s far too sensitive for the intended application.
Top

Tortoise wrote: ↑
Wed Nov 25, 2020 1:45 am
A recent medical study found that of people who test positive for SARS-CoV-2 on an RT-PCR test with a cycle threshold of 35 (the standard threshold currently used in the U.S.), less than 3% of them are actually infectious:

The take-home message: For many months now, U.S. policy decisions on lockdowns, school closures, etc. have been based on an RT-PCR test setting that’s far too sensitive for the intended application.

Depending on the definition of "intended", of course.

I have not approached my friends here at work who were of the belief that on Nov 4th, Corona would just start "disappearing."

Wondering for those who track Q or other conspiracies, what the latest conspiracy morphing has become?

Has it gone from Covid disappearing after the election to Biden's going to lock everybody down for months and destroy the economy?

I suppose most in the conspiracy crowd still believe Trump will stay in office?

I thought I was writing this tongue in cheek, but I am seriously asking.
Top

Corto, is this a conspiracy?

Why Is Big Media Hiding That Illinois Has Far More COVID Cases Than Florida? Because Illinois Has A Democrat In Charge And Tighter Lockdowns
Top

Why Is Big Media Hiding That Illinois Has Far More COVID Cases Than Florida? Because Illinois Has A Democrat In Charge And Tighter Lockdowns

And if the intention was to single out FL so more people would vote for Biden, it didn't work.
Top

Is that even really worth talking about? It all depends on how much testing is done - which depends in part on how panicky the population is. Remember that when the media says "cases" they really mean "positive tests", which are an entirely different animal and some unknown proportion of them are clinically irrelevant. And "hospitalizations are increasing" is not helpful either, because that always happens this time of year. You need to know whether the increase differs from the normal range.

Perhaps a better assessment is the question I asked a couple people I know on the front lines: If there was no media reporting, no testing, and you weren't aware that there was such a thing as COVID, would current conditions in emergency medical settings be unusual?

My sister (ER doc in Massachusetts) said yes, because of nursing home patients coming in with clinical syndromes that are not like the flu. The number of these isn't too different from what she'd normally see, only the clinical presentation. And she's not seeing anything unusual in any other demographic group.

My friend (NYC paramedic) said no. He's been watching the figures for ambulance/911 calls, and there is nothing out of the ordinary going on. In the spring he was working extra shifts nonstop for the two months that the big spike lasted, but none of that is happening now. Wonder what they're going to do with that new field hospital in Staten Island...probably same as the one in Javits in the spring, i.e. a bunch of photo ops for the governor.
Top

A lot of times, what looks like a conspiracy or coordinated action is just common goals.
Top

Pardon the weird format (lack of capitalization, etc.); I copied this verbatim from Twitter. Source link provided at the bottom of this post. 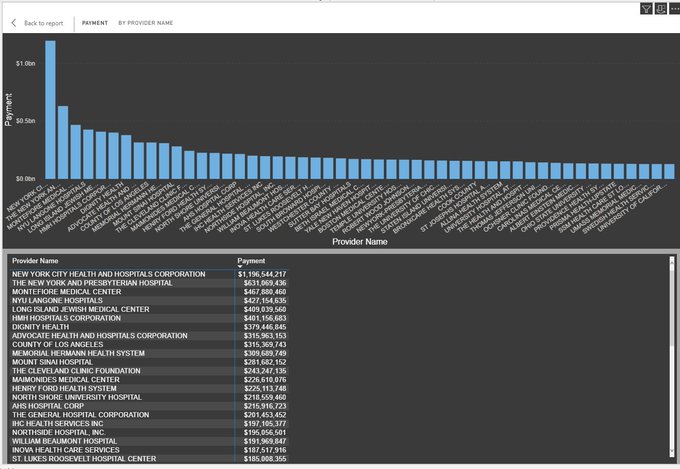 big props to NYC HHC for getting twice as much as the next closest competitor!

$1.2 bn in federal funding. to one hospital system.

these are the true champions of crony capitalism.

the only hospital outside of NY state to break $400mm in funding was HMH and they are actually 1/2 in NY 1/2 in NJ, so they get some honorary rights

boy, knowing how to play the pork game sure does pay.

$98 billion has been allocated via this program. 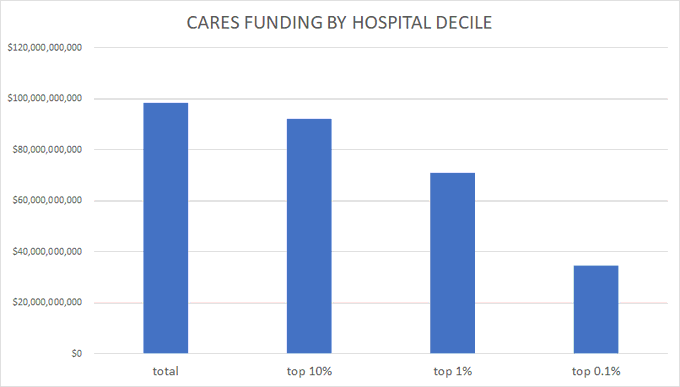 so, the next time you wonder: "why would hospitals seek to overstate covid" keep this in mind.

this is why. it's been a massive pork barrel bonanza if you know how to play the game of "find covid, get paid from federal firehose of funding." 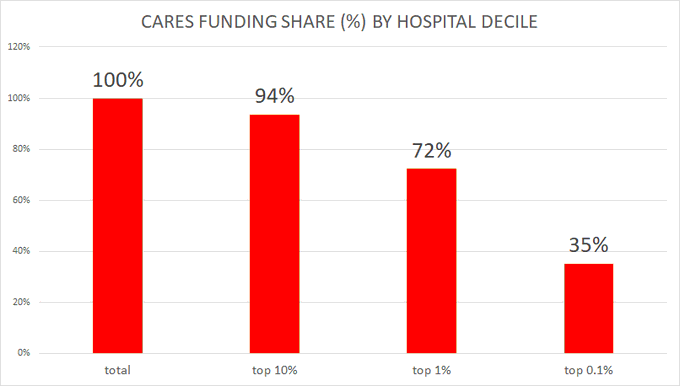 this has been a never before seen grab bag of goodies and danger for the US hospital system.

they were forbidden from undertaking the elective procedures that pay all the bills and left reeling and insolvent.

then they were offered gobs of free money for finding covid.

what else could they do? this was clearly a gravy train leaving the station and their core businesses had been demolished by governmental diktat.

so they responded to incentives to survive.

it's not some conspiracy, it's just bad incentives breeding bad behavior.

and until we shut off this staggering spigot of funding, it is not going to stop.

big business LOVES crony capitalism. it's safer, more predictable, and harder for competitors to encroach on.

it's also terrible for consumers, taxpayers, and in cases like this all citizens.

the over reporting and over-diagnosis this encourages is then used to inform policy that further limits hospitals' traditional revenue lines and adds more pork.

competing for that pork ups apparent dangers through over-reporting.

it's inescapable so long as the money flows and it rewards the worst and most aggressively cronyistic and at the expense of the honest and non-politically connected.

it is everything you do not want in a hospital system and a government.

the tool can be found here:

feel free to check my work.