Discussion of the Stock portion of the Permanent Portfolio

Apple was added to the Dow in 2015, and Cisco in 2009. So you're not comparing Dow stocks to the DJIA, you're comparing the DJIA to companies that started small and grew big enough to be elevated to Dow status. In short, you would need Dr. Who's Tardis in order to get a result like this.

It is however a good illustration of a worst-case tracking error of the basket of stocks strategy to an index fund. It can definitely be sizeable and can go either way.

Sampling problems abound! That's a great asset class though... "buy the stocks which grew to be great before they were great". I love it! Compile and license that index!
Top

Until then, smallcap?
The new Freakonomics: Why Are Cities (Still) So Expensive? (Ep. 435)
Top

You've inspired another backtest, Ochotona! The 30 components of the DJIA on January 1, 2000 were:

That gives the following 29 companies that still exist today:

With the merger of ATT and SBC, and the limited data for Alcoa, Kodak, and GM, we have 26 companies in the model portfolio. Data below are for equal weighting, no rebalancing, and dividends reinvested (in this case, rebalancing or not gave the same result: 8.11% CAGR): 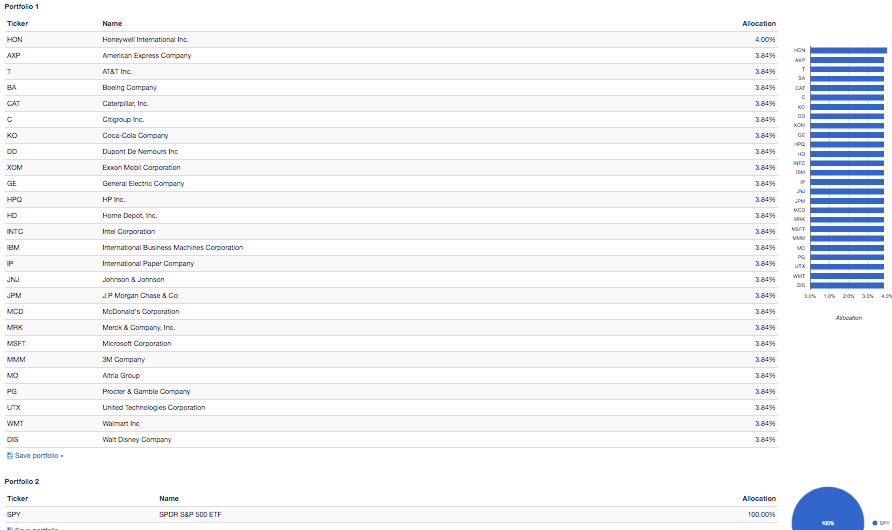 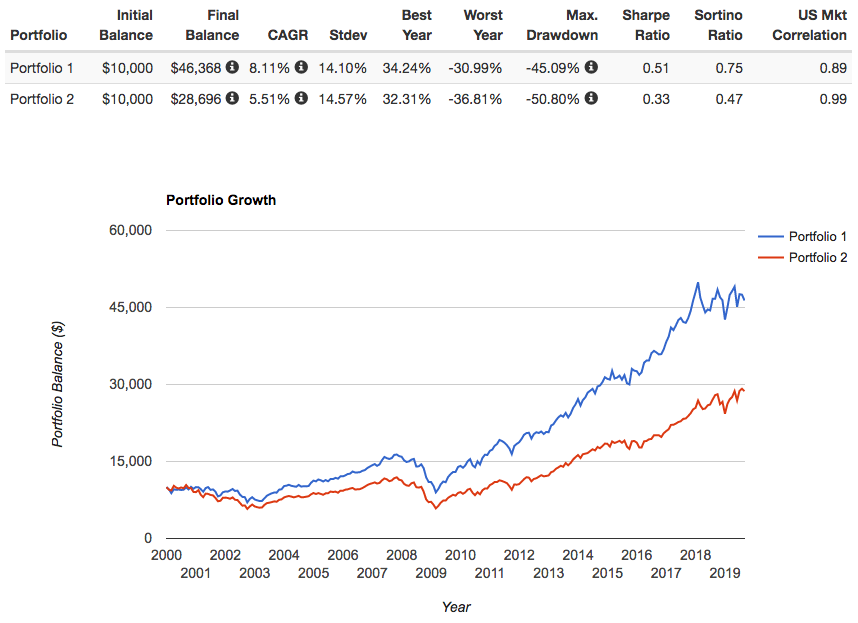 Even if we consider Kodak and GM going completely worthless, that would have been only $700 or so lost ($10,000 portfolio of 30 companies is $333 invested in each). This portfolio would still have crushed the SP500.
Top

sophie wrote: ↑
Fri Sep 27, 2019 8:13 am
Pet Hog, I'm not doing any kind of quantitative analysis because I don't think that would improve results over random picks. Broadly, I'm going for what I think are solid "value" stocks that have a record of increasing dividend payouts, have a relatively low P/E (or at least not too high), and are in businesses that won't be going away anytime soon and could survive a recession. I try to spread the choices among sectors. I also "cheat" by looking up holdings and recent purchasing by Berkshire Hathaway, to get a short list of ideas. I'm looking at Southwest Airlines or Coca Cola for the next time I have money to sink into stocks, for example.

It's fun to watch the stocks go up and down, and overall they do track the indexes reasonably well. I forgot to mention another plus of doing this: more opportunities to tax loss harvest and avoiding unwanted capital gains like you get with index funds.

I put about $5K into each one, and eventually will start buying more of the ones I have (lagging asset) once I have enough of a collection. Meantime, I'm reinvesting dividends. Like I said, nothing fancy. This is how our parents and grandparents invested in stocks, and it worked just fine.

Thanks, Sophie. This post is full of wisdom. I think if I were to implement a DIY index, I'd follow something like your strategy, but maybe tilt somewhat toward mid- and small-caps as well. You mentioned earlier holding 10-20 stocks, and I'm more inclined toward 30-50, so there is room to implement both!
Top

If you want to buy individual stocks but are afraid of a company going out of business then simply pick a large or mid cap index and use a longer term momentum or some type of annual quality screen. If the stock gets booted from the index and/or doesn’t make your screen get rid of it. That doesn’t mean you won’t mean you won’t have HUGE draw down but it will keep you from buying Eastman Kodak or Enron etc. into the ground...and if you are going to buy individual stocks you should give them a health check once a quarter.

Seriously, only major stubbornness or stupidity would keep the small investor in a stock going bankrupt.
Top

Thanks Pet Hog, and good luck! Buy as many stocks as you want of course. Eventually the list starts getting Too Long and you'll know when that happens.

The backtest still overestimates results because it requires that you knew back in 2000 that Kodak, Alcoa, and GM were going to do badly. And it's not just the $700 you would lose: the amount invested in the rest of the stocks would be correspondingly less, and that missing amount would have "compounded" along with the gains. Figuring that you sank $1000 of the original $10K into those three companies, a lower bound on performance would be 90% of the final portfolio balance, or $41,731 - still a great result though. Buy and hold ain't so bad a strategy, for sure!
Top

Kbg wrote: ↑
Mon Sep 30, 2019 8:35 pm
If you want to buy individual stocks but are afraid of a company going out of business then simply pick a large or mid cap index and use a longer term momentum or some type of annual quality screen. If the stock gets booted from the index and/or doesn’t make your screen get rid of it. That doesn’t mean you won’t mean you won’t have HUGE draw down but it will keep you from buying Eastman Kodak or Enron etc. into the ground...and if you are going to buy individual stocks you should give them a health check once a quarter.

Seriously, only major stubbornness or stupidity would keep the small investor in a stock going bankrupt.

Notice that Altria is on that list. I’ve been enjoying the rising dividends for nearly 15 years, but the share price has been a weird ride. Every time the government raised excise taxes it felt like the stock wouldn’t recover. Every time a major lawsuit was brought it felt like the sky was falling.

Shareholders argued online whether it was a buying opportunity or time to get out once and for all. As you can see in the dedicated Altria thread in the VP section, Altria unexpectedly went up a few years ago. It was going crazy. In hindsight, it was time to get out, but I thought it had a bright future ahead in transitioning from tobacco to (at least infrastructure for) cannabis. Now there’s the Juul investment and kids vaping chemicals and fake cannabis. Only stubbornness and stupidity has carried me through.

Forget all that- what do you do when Altria spins off Philip Morris International and Kraft? Those are decisions I had to make.

Backtesting is fun, but holding these stocks for decades is very different than a quick look back.
The new Freakonomics: Why Are Cities (Still) So Expensive? (Ep. 435)
Top

From someone who has backtested a lot, do not think you will get accurate results unless you have a data source that accounts for index changes on the day they happened historically.

Anything not using the above, will be grossly overstated. (Perhaps the Dow is doable by hand, but at least do your homework on what has changed and when.)
Top

One way I tried for a while was on Jan 2 of each year, just look at the S&P 500, 400 and 600 etfs and buy the top 10 holdings in each one. That gives you 30 stocks diversified by market cap. Then next Jan sell the ones that are gone and buy the new ones. The few years I did it, I always outperformed the indexes,if only by a little.
Top

This seems to possibly be a reverse "Dogs of the Dow"?

"I only regret that I have but one lap to give to my cats."
Top

Pet Hog wrote: ↑
Mon Sep 23, 2019 2:45 pm
I've been mulling for a while getting out of holding total-market ETFs as my stock holdings in my PP and setting up my own fund of perhaps 30 to 50 individual company stocks. For a few reasons: to cut out the middleman (avoid counter-party risk and fees, albeit tiny), to experiment with an equal-weighted portfolio (rather than market cap-weighted), and to have a bit of a thrill with managing such a thing (while maintaining the PP philosophy). There's been some discussion here before about DIYing a stock fund, and I'm curious if anyone here has set up their own and/or has any ideas on which strategy to use to select the holdings. I'd like to be as unemotional/mechanical as possible, and minimize trading/fees.

Here are some potential strategies [and my thoughts on the wisdom of adopting them]:

(1) Pick the Top 30-50 stocks by market cap [overweight tech, low dividends, less room to grow, but exciting and newsworthy companies]
(2) Randomly select from SP500 (or Wilshire 5000), like every 10th (or 100th) one or by random number generator [unemotional, diversity of sectors and market caps]
(3) Mimic a famous index or fund, like DJIA or Wellesley? [let someone else pick the stocks, established, diversified]
(4) Select equally among the large/small-cap growth/value quadrants, say 10 each? [choose unemotionally from established funds/indices, but high risk of picking lemons?]

I think all four strategies have their merits, but I'm drawn to the latter three. The biggest problem I can foresee is what to do when the whole PP needs a rebalance out of stocks -- it would require a lot of selling. So perhaps this approach could be adapted as just a fraction of the PP stock tranche and also hold, say 30-50% VTI, for rebalancing purposes.

What do you fine people think?

So did you ever give this a tryout?
Top

No, not yet. Perhaps when/if I rebalance into stocks.
Top
Post Reply
50 posts